Both sides had their chances during the round one A-League Men clash, but neither found the back of the net in the 0-0 stalemate.

A long-range strike from new English recruit Jack Rodwell nearly sent the boisterous crowd of 23,118 into raptures at Western Sydney Stadium, but a flying save ensured both sides would walk away with one point to start their campaign.

Despite the best chances belonging to the Wanderers, Sydney will walk away from the derby feeling like it missed an opportunity.

Dominant for much of the contest, the men in sky blue struggled to convert possession and territory into genuine goal scoring chances.

Sydney FC midfielder Miloš Ninković was one of his side’s best, proving the central focus of the away side’s attack.

He said missed chances in the first half cost his side three points.

“I think we played very well, especially the first half. We had a few chances, and I think we should score,” he said.

“That second half, I think we dropped a little bit more, and didn’t kick well, and I think [a draw] it’s a fair result.”

In a cagey first half, both teams had moments of dominance as they tried to find their way through the opposition defence.

While the penalty boxes were peppered, each keeper only had one true threat on their goal.

Wanderers had the first major chance of the contest in the 13th minute when Dimitri Petratos’s shot was shielded way by Redmayne.

Redmayne showed quick reactions to get off his line to cut down any chance Petratos might have had on goal after the ball fell to him on the six-yard box.

A sharp save from Wanderers keeper Tomás Mejías in the 33rd minute kept the scores level when he was forced to parry away a strong header from Trent Buhagiar. 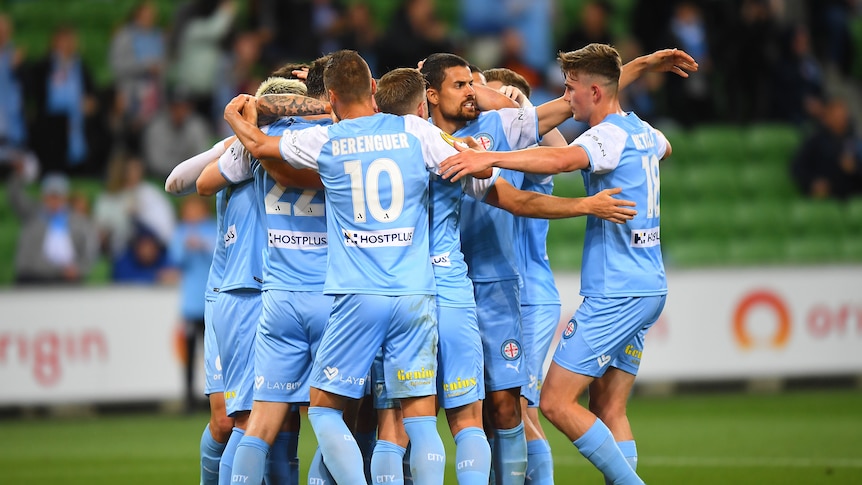 Sydney had worked the ball upfield on the counterattack which led to a pinpoint cross from the right into the near post.

The ball bounced around the six-yard box after Mejías’s save but Sydney was unable to get a threatening shot on goal.

After finishing the first half on top, Sydney FC came out the better of the two sides for the second 45 minutes.

The visitors pressed forward in the Wanderers’ half trying to find the game’s opening goal.

But for all of its dominance, Sydney struggled to threaten Mejías’s goal.

Despite looking like they were hanging on, the Wanderers had the two best chances of the second half.

Midfielder Bernie Ibini-Isei leapt high in the centre of the box to guide a header towards the Sydney FC goal.

But Ibini-Isei could not control the header which sailed over the bar, never really threatening Redmayne who watched it fly over his head.

With little over 10 minutes remaining, Wanderers’ manager Carl Robinson brought on Rodwell in search of a late goal.

The former England international came close to the winner, with a diving save from Redmayne denying him.

The former Everton star said his strong 15 minutes on the pitch was hopefully a sign of things to come this season.

“I’m 30 years old and I feel I still have the best years ahead of me, which is why I came here, not to come on holiday,” said Rodwell, who is married to an Australian.

A 75th-minute strike by Portuguese centre back Roderick Miranda gave Melbourne Victory an opening round win over Western United.

The header came from a Jack Brimmer corner with 15 minutes to play, as Miranda climbed above the pack to steer the ball past the near post.

It was the perfect start for Victory under new boss Tony Popovic, who is trying to rebuild the club that finished at the bottom of the ladder last year.

Western United had the best of the of the first half, but could not find the opening score.

Ben Garuccio had the best chance of the half, striking from close range on an acute angle after a soft pass from Connor Pain.

The strike required Victory keeper Ivan Kelava to stick his left leg out to keep the ball out of the back of the net.

United, coached by John Aloisi, had a penalty shout late in the contest which was waived away, as it starts its third season in the league with defeat.

On Ukrainian Front, Grinding War and Weary Anticipation of Invasion